Journey Not Quite to the Center of the Earth Strikes Back
0.156 Years Before The Mast 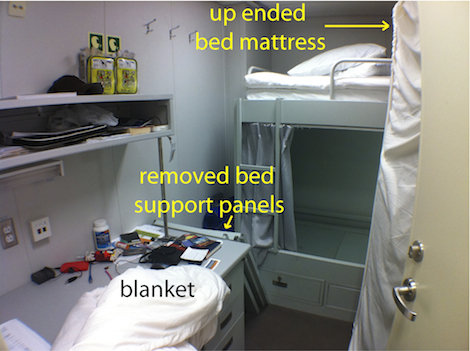 Life can be dangerous for those who work on the sea- especially if you are an iPod.  I narrowly escaped losing my iPod to the crack between my bed and the wall- in today’s blog post I recount this harrowing adventure!

I thought I was pretty smart by purchasing a really loud alarm clock for this cruise to wake me up on time.  OK, actually, it was my wife (thanks Rosalynn!) who was smart and purchased the clock for me.  However, upon plugging the clock in, I discovered that the electrical outlets in our cabins are not regulated.  Therefore, the level of electricity is not steady and sometimes the clock was too fast, other times slower.  Either way, i wouldn’t be using that wonderfully loud clock (note to future Resolution scientists- bring battery operated alarm clocks!).

That’s OK, I have an iPod, and they have alarms.  So my iPod was working fine as my alarm for the first few weeks, until one evening, at 3:30 AM (of course; this would never happen at a reasonable hour), I was reading before falling asleep and knocked the iPod down this really small slot between the bed and the wall.  Here’s a photo to show you how slim that slot is:

Now, you probably notice how the iPod has to fit nearly perfectly to fit down that slot.  It takes a special kind of spazz to make that work, and I can be quite spastic…

Of course, panic set in.  I tried to reach down there, but couldn’t even get a pinky in there, and the floor is a good 50 centimeters (~18 inches) below the top of that slot.  So I gave up for the night and went to bed, to be awoken by ten minutes of straight beeping when the alarm went off and I couldn’t reach my iPod.  Nice.

My first attempt to retrieve the iPod involved fashioning a fishing hook out of copper wire with duct tape on the end, and then poking around that space to try to grab on to the iPod.  Sounds like a winner, right?  Shockingly, it wasn’t.  I then tried using a long metal ruler that we use to measure cores (it’s about 2 meters (~6 feet) long) to push the iPod out the other side of the slot.  I was pretty sure this would work, and it did!  I was able to successfully retrieve several pamphlets dropped down that slot by previous residents of my room, plus a case of used earplugs- awesome (and disgusting)!

Here I started to panic, both over the idea of no music and also no alarm combined with a few days (until the battery dies) of an alarm I can’t set or turn off.  This is a scary future!  So logically, I decided to dismantle the bed.  You can see how well that worked in the photo at the top of the blog.  I took the sheets off, removed the mattress, took out the bed support panels, and then found that parts of the bed are welded together.  NOOOO!!!!!  I wouldn’t be able to take apart the bed any further, plus those drawers you see at the bottom of the bed don’t go all the way through, so i couldn’t go through those to get the iPod.  It was looking pretty bleak at this point.

I was desperate.  I decided to consult some of the ship’s crew; surely they’ve had similar problems?  Well blog readers, it turns out they had, and help came in the form of Lara Miles.  In another life, she is our Expedition Curator, the person who keeps track of all samples and makes sure they are taken correctly and then shipped to all the different scientists following the cruise.  There are literally thousands of samples among all the scientists, so this is an important job.  However, on this day, she became Lara, Saver of Jason’s IPod!

Lara found a magical spatula that is both wide and long, and she was able to use it to get under my iPod (between the iPod and the bed) and wedge it against the wall as she dragged it up.  The day was saved and I got my iPod back!  Here’s a photo of that spatula, with my iPod and a pen for scale (classic geologist move to include the pen for scale):

So now my iPod stays on my desk at night and it’s much safer there.  However, there have been other iPod near disasters on Expedition 330- Svenja Rausch travelled all the way from Germany with her iPod only to put it through a washing machine cycle!  Luckily, one of the crew was able to open it and put it in a dessicator (a container used to dry samples), where it dried out over a few days and now it works again.  Lucky for Svenja, because she spends 12 hours a day describing how the rocks we collect change with weathering (this is called an alteration specialist) and you better believe you need music for that job!