Paleomagnetism and STEM Diversity at the School of Rock 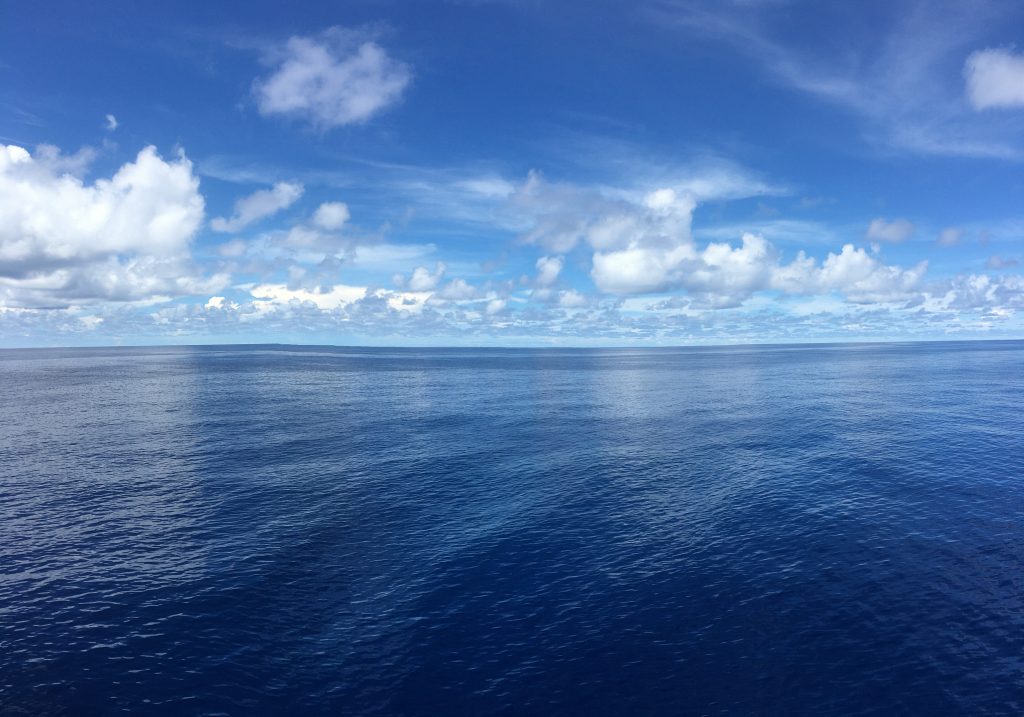 Hello again from aboard the JOIDES Resolution! Today is our sixth official day of School of Rock, and it astounds me how much we have all learned in such a short amount of time. My name is Colleen Henegan, and I am an AP Environmental Science teacher at KIPP Austin Collegiate High School in Austin, Texas. I found out about this amazing opportunity through my geologist friend…and fellow School of Rock-er…Rachel Bernard. We are both passionate about earth science and about increasing diversity within all fields of science, so we both jumped at the opportunity to participate in a dynamic program like SOR that is looking to address issues of diversity in STEM. Rachel and I met through an incredible program run through the University of Texas known as the Scientist in Residence Program (SciRes for short), which is a program that pairs graduate students in STEM fields with science teachers in the Austin area. Rachel came into my classroom to talk to my students about her research and help them understand what scientists actually do in their day-to-day lives. She helped bring real science into my classroom, and opened my students’ eyes to who scientists actually are. 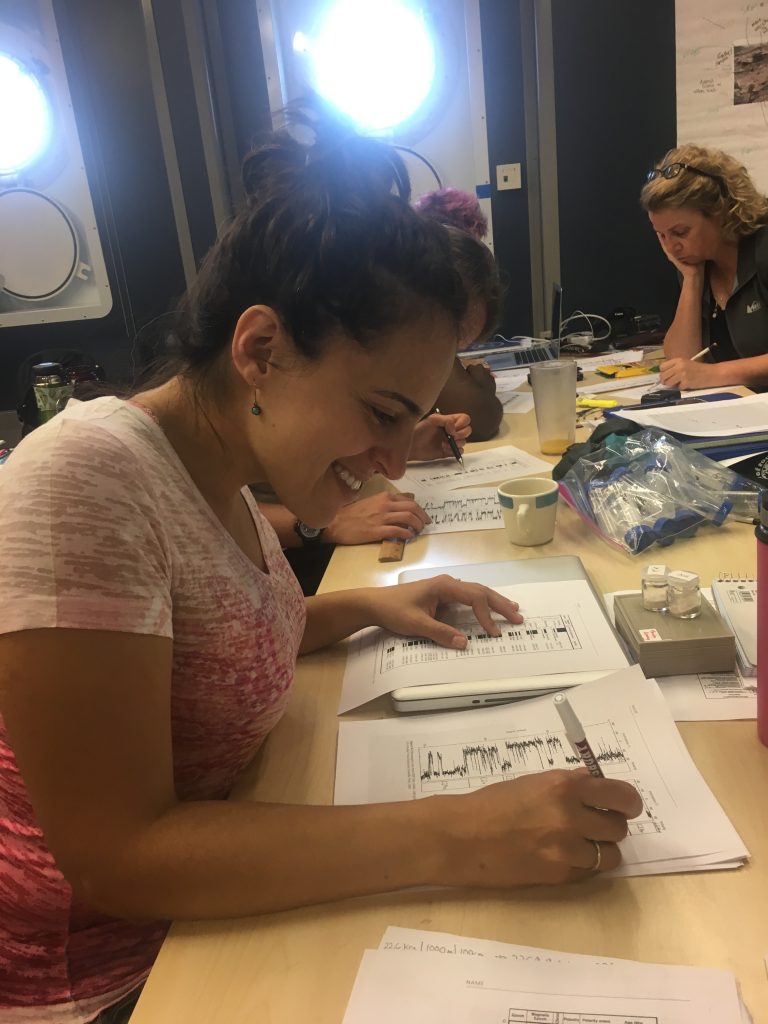 Today our science sessions mainly focused paleomagnetism and how sediments found in core samples are dated. I was especially excited to cover these topics because I often have a hard time clearly and concisely describing how the geologic time scale is determined and how climate change data is collected to my students. We learned that scientists use three tools to determine the age of an ocean core sample: absolute dating of isotopes, relative dating of micro and nanofossils, and paleomagnetism. Once we know the age the sediment we are testing, we can determine factors about the ancient climate by doing some amazing tests. Some of these tests include identifying the types of land-based sediments found in the core to determine global wind patterns at the time of deposition and analyzing how much of the Oxygen 18 isotope is found in the sample (more of this oxygen isotope typically means colder water!). 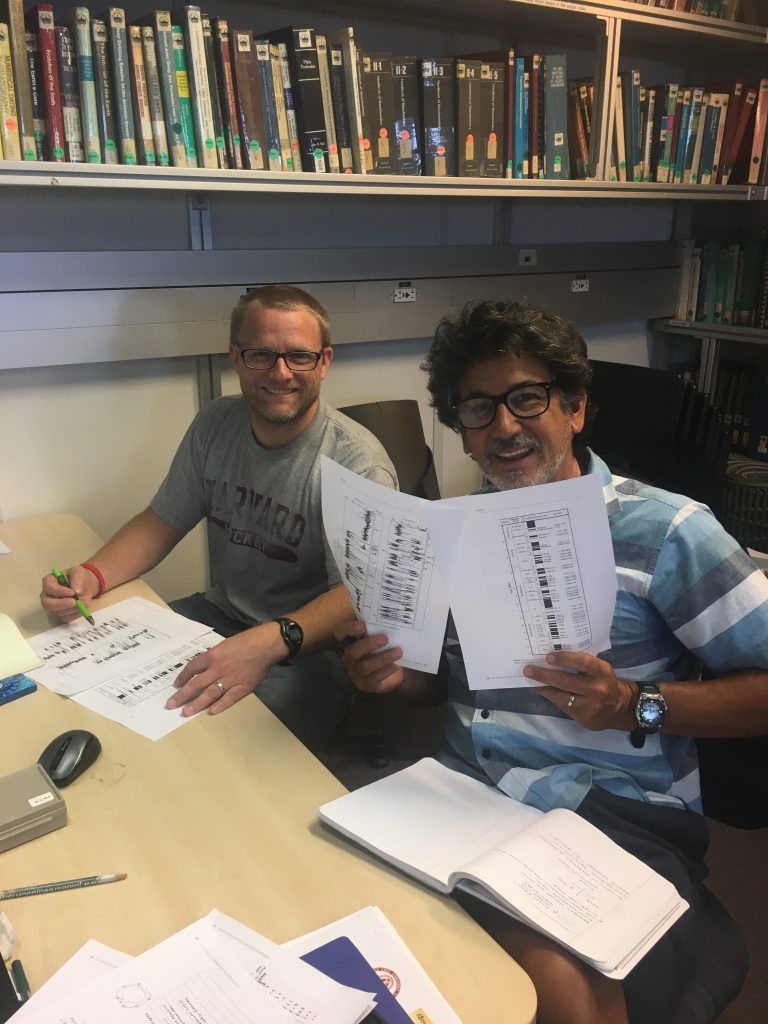 Our focus today was specifically on how the magnetism of ocean core sediments can help us place a section of core at a specific period of geologic time. In some parts of the ocean (and most famously in the middle of the Atlantic Ocean), a process known as sea floor spreading is taking place. As the tectonic plates diverge under the Atlantic Ocean, new volcanic crust is deposited in space left vacant by the moving crust. This volcanic basalt is laden with magnetite, which aligns to the magnetic north pole at the time it was formed. As a result, we have an extensive record of the Earth’s magnetism throughout geologic time. We can therefore match the polarity of a section of ocean core to this official record of paleomagnetic time. This allows us to know almost exactly when a section of core was deposited. The climate data taken from that section of core can tell us what the climate was like on Earth during that time. Pretty amazing, right? 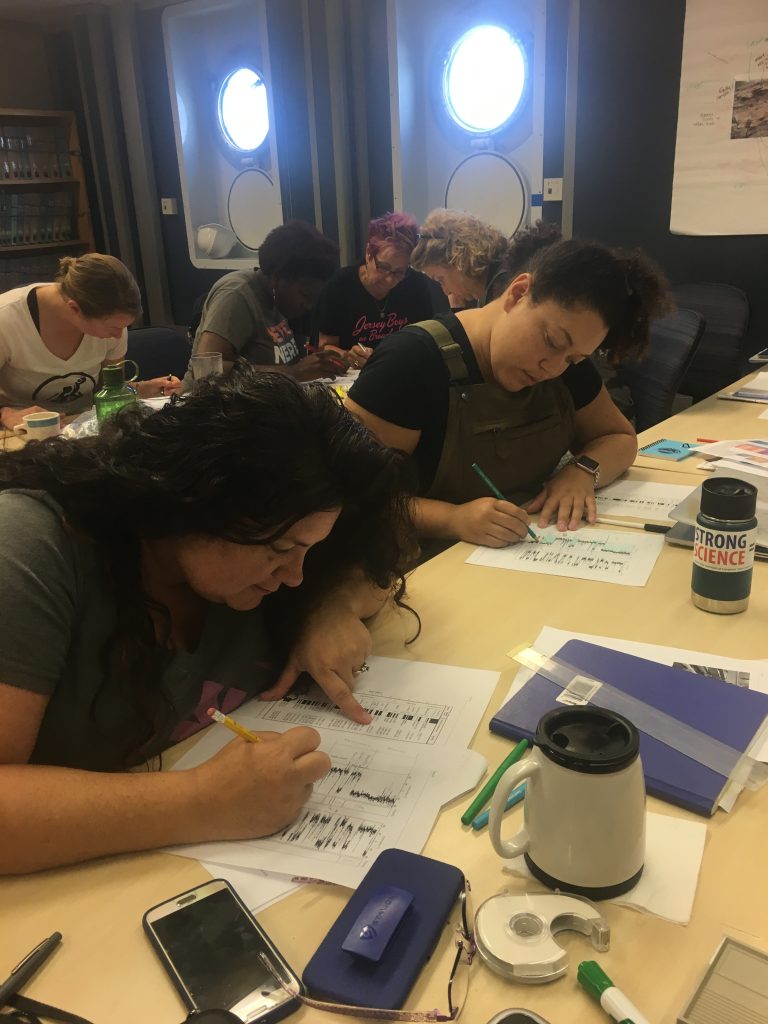 Our final session of the day was a fantastic brainstorming session on ways to increase diversity in STEM fields with a specific focus on geology. This topic really hit home for me because it is one of the reasons why I became a science teacher. I absolutely loved rocks when I was a kid. I had a gigantic rock collection that was about forty pounds and was filled with the most beautiful, colorful, interesting rocks I could find. My parents were patient enough to support me and lug that giant tub around for me when I was too small to move it myself (thanks Mom and Dad!). That passion and determination to pursue earth and environmental sciences faltered when I reached middle and high school. For various reasons, some of which were related to my gender, I began to question my capabilities. I doubted whether I could actually actually learn the math and science needed to be successful in that field. I didn’t know of many, if any, female scientists, and didn’t really know what an earth or environmental scientist actually did. After completing college, I decided to become a teacher so I could help students like myself who struggled in math and science feel more confident and successful in high school, and hopefully encourage them to leave these doubts behind and pursue a STEM career.

I was astonished by how many of my fellow School of Rock colleagues had similar experiences or know of amazing, competent young men and women who have been discouraged from pursuing a career in STEM fields because they didn’t feel confident in their abilities or they didn’t see themselves in the field because of a lack of role models when they were younger. The school that I teach at mostly serves students of color from low-income backgrounds. Many of these students are interested in STEM fields, but are intimidated by the lack of racial diversity and do not know what scientists actually do in their day-to-day lives because they don’t know any scientists. This is why programs like School of Rock and the SciRes Program at the University of Texas are so valuable. Because Rachel brought her research into my classroom, my students were able to meet a scientist who is a young woman of color. They were able to see themselves in her, and looked up to her as a role model. I am proud to say that many of those same students are headed off to college next year with the intention of going into a STEM field. While this is a joyful accomplishment for my students, I hope that the colleges that they are attending are passionate about educational equity, and provide mentoring and role models for these students to follow to help them persist in their chosen major. 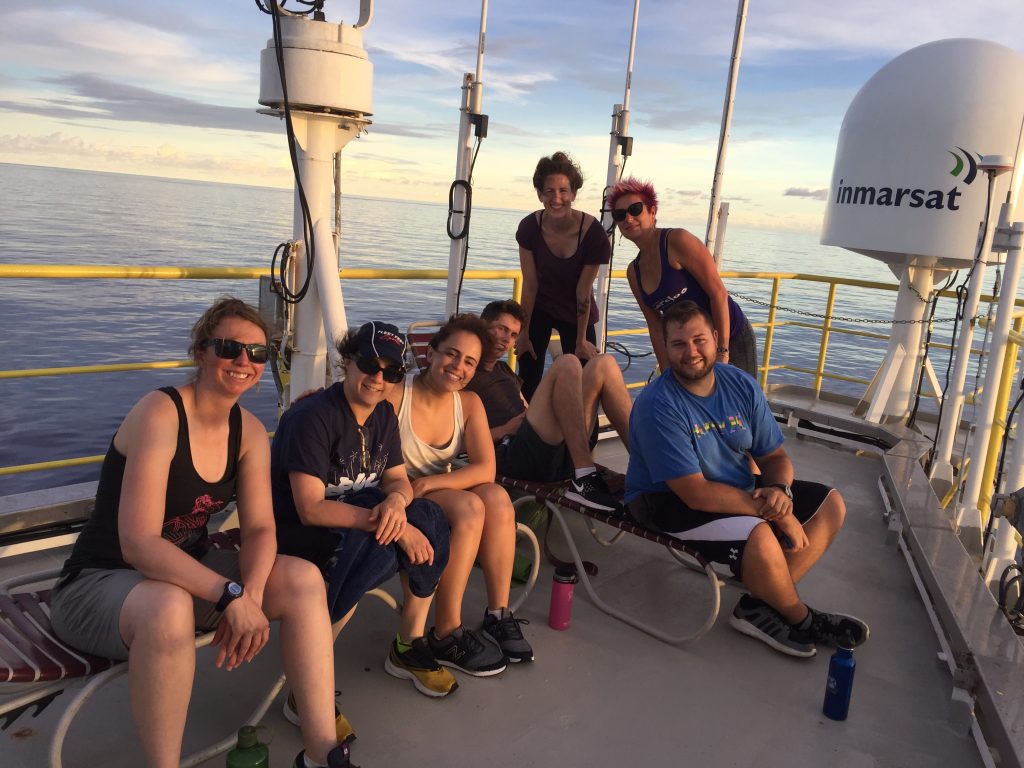 Although I have only been sailing aboard the JOIDES Resolution for a few days, I have been struck by how miraculous our small, isolated planet really is. Every day I wake up and step outside to see the sun reflecting off of the glassy surface of a deep, impossibly blue ocean. I see beautiful, puffy white clouds hovering on the horizon, waiting to release their contents back into the ocean with the typical intensity of the monsoon season. We see flying fish, dolphins, and bioluminescent algae glowing in the water as it splashes on the bow of the ship as we slice through the ocean at night. Every evening we practice yoga together on the top level of the ship, and crowd around on lawn chairs to watch the miraculous reddish-orange hues of the sun appear on the horizon as it sets. At night we clumsily feel our way around the pitch-black deck of the ship to gaze at a night sky that is littered with bright, beautiful stars.

The beauty, awe, and peace that are found in these moments is inspiring. The impacts of human development on the environment are never far from our minds, however. It is painful to see pieces of trash bobbing along on the waves beside the ship, even when we are so far from human development. Our planet is threatened by a myriad of complicated problems. These problems will only be solved if we can bring “all hands on deck” in the scientific community, regardless of the age, race, and gender that those hands belong to. Investing in science education and building diversity in STEM fields are integral to discovering more about how our planet works and overcoming the difficult challenges that face it, and the human race, in the future. 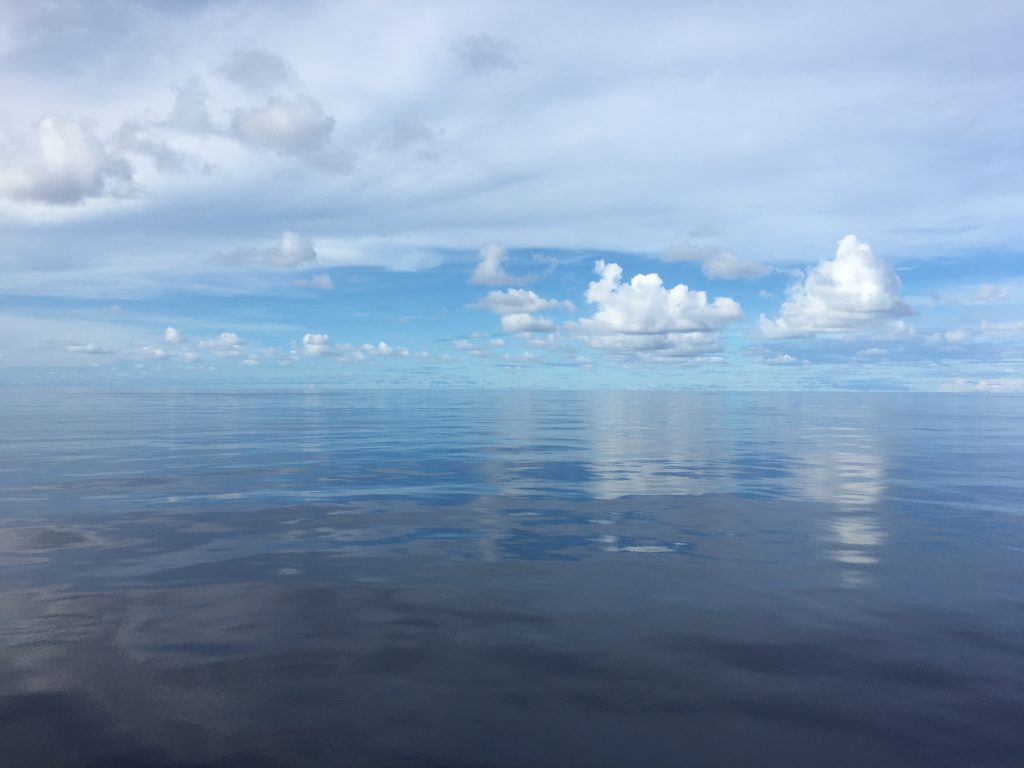