Pekar’s Blog August 2nd: Why did I become a scientist?

Why did I become a scientist?

I guess that is a question that is asked a great deal to me. I am always puzzled by this question as for me, being a scientist (and especially a professor) is probably the coolest, most fun occupations one can have. Think back being a kid. We always loved exploring, playing, creating, and making things out of our imagination and creativity. Well, that is what a scientist does for a living.

As a professor, my time is split between research and teaching. I teach no more than classes per semester. However, each class for me is an opportunity to share my enthusiasm and passion for what I do and have learned to young people who are remarkably like who I was when I was a student. In fact, I was an undergraduate student at Queens College, first majoring in 20th century music composition, later to get my BA in education and then later went back for my science credits at Queens College. Also, the lab classroom that I teach in was the room where I took my first upper level geology class. So, when I teach my students there, I can tell them that I do understand what they are going through as I was here, in fact, I use to be a student in this classroom and this (pointing to the third seat on the right) was my seat!

Freedom to explore my passions
While teaching can take a big chunk of my time during the semester, the rest of my time is mainly for conducting research. As a professor, I can pick and choose exactly what I would like to do research on. There is no boss, telling me to push some papers from one side of the desk to the other, or someone dictating what I must do. In fact, I have evolved and moved from one topic to another through my career, exploring new avenues for research that can become new passions and interests. So when I find a new topic of interest, I can either try to begin to develop a project on or just talk to scientists who are already working with them and see if we can collaborate in some way with them.

Also, my time is also my own. Outside of the times of teaching and occasional meetings, I can come in anytime I want and work as long as I want. However, I probably work far longer than the average person and in fact, often work late into the evening and often work at least part of the weekends. But that is because I am enthralled with learning and discovery of the unknown.

Why do I have passions?
Why am I so passionate about learning? It comes down to trying to understand the beauty and magic of nature and the world around us. The world is so incredibly beautiful and rich with diversity. The magic of this planet is one of the greatest gifts given to humanity. Being a scientist is a full time job in being immersed in observing, learning and exploring this world. There is also a practical aspect as well. While each type of science provides rich and rewarding knowledge that can aid and improve the human condition, Geology can provide a prospective about our world that is perhaps unique in the science.

To paraphrase one of the great paloenotogist of our time, Bill Berggren,

“it is the [geologist] who has the responsibility of unlocking the key to time that is buried in the deep sea and in the mountain chains of the world and once having done so, reveal the mysteries of the evolution of life itself…. A noble calling indeed.”

Also, as I mentioned before, the Earth has gone through numerous cycles climatically, tectonically, oceanographically, etc., with these past time intervals providing a view like a time machine that can provide insights to our present world and clues about what our future world could be like. The most pressing issue today is about climate change. Past time intervals have occurred before that were indeed much warmer than today and also had much higher atmospheric greenhouse gases such as carbon dioxide. While many aspects control climate, it is now almost a certainty (>95% confidence level) that the rapid rise in global atmospheric temperatures and the climate changes being observed today are due to humanity’s changes in atmospheric concentrations of greenhouse gases (and land use).

Geologists are time travelers
However, while I am speak of mainly the present-day world, it is when we add the fourth-dimension, time, that our world becomes just out of this world. This makes geologists time travelers of our planet. Using our knowledge of the rocks, sediments, fossils, being able to interpret the geo-chemical signals, we hear the stories of Mother Earth, her incredible beauty history going back to distance past eras that are millions to billions of years in the making. Her history is so profound that going back just a fraction of her history, we would barely recognize her, the landscapes or the animals and plants.

In fact, I often ask my students at the beginning of the semester, “who likes science fiction, or who would like to travel to another planet?” “Well, you do not need Star Wars or Mr. Spock, you just have to take my Historical Geology class.” For example, if we could go back in time just 5% back into Earth’s past, and were to look down at Earth from a space ship, we would not be able to recognize any of the continents. This is because they had all collided into a super continent called Pangea. If you landed and walked around, you recognize almost none of the species, sure some would look similar, but we would see strange and exotic forms that would more likely resemble someone’s creative imagination in a sci fi movie. And this is only 5% of Earth’s history. Just imagine the other 95%! 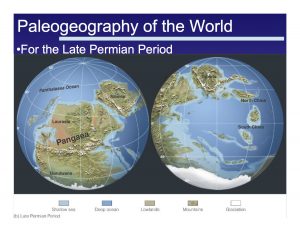 This is how the world looked just about 5% back in our planet’s history. That is about 250 million years!!!! 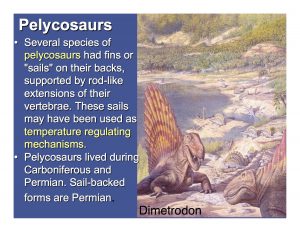 This is one of the most advanced forms of life back then. BTW, mammals probably evolved from something like this!!!

I have always like Star Trek and the idea of traveling to another world. But, once I got into geology, I realized that I can visit strange lands with animals and plants on strange continents that do not exist today and I can be the one to explore and discover new insights to these “other worlds”.