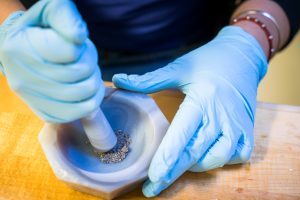 G’day!
I’m Lauren O’Connor, a shipboard geochemist on Expedition 369. I’m from Brisbane, on the east coast of Australia, but I currently live in England, where I’ve just finished my PhD at the University of Oxford.
My work on the JOIDES Resolution usually involves crushing rocks and weighing the powders. Not terribly exciting, but the wealth of information that you can get from analysing these powders makes it worthwhile! The chemistry of these rocks can tell you all about the climate and environment at the time the rocks formed. As a palaeoclimatologist I am interested in reconstructing past climates—the temperature of the ocean, the amount of CO2 in the atmosphere, ocean circulation, and how these things changed through time. I’m also interested in where the sediment that forms the rocks came from: is it from land or formed in the ocean? If from the land, was it blown in by the wind, or brought by a river?
My work ties in with that of others on the ship, for example Lloyd, who studies the breakup of Australia and Antarctica, and Rodrigo, who uses microfossils to determine the age of the rocks. Together we can reconstruct when the land between Antarctica and Australia gave way to ocean, and how this led to changes in the climate and environment.
When I’m not on shift I enjoy soaking up the sun on deck (something we don’t get much of in England!), going to the gym, or reading. I really enjoy being on board, spending time with friends and fellow scientists, geeking out about our new data! 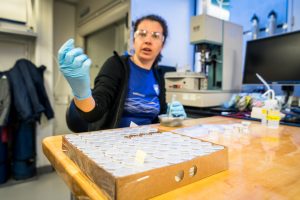