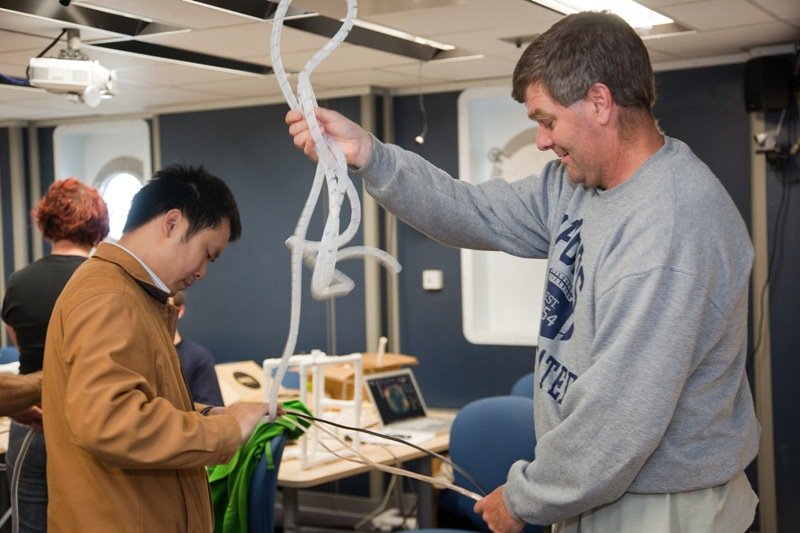 As interesting as day one was day two was much more fun. Umbilicals and Drimmels

At the start of day two in the exciting world of ROV building, the group was split into two pairs and sent to different tasks.  Two teams we asked to stay with Geoff Wheat and Beth Orcutt. The others were asked to work with Sam Hulme and me outside on the catwalk.

The teams with Geoff and Beth got the exciting task of rolling out 50 foot lengths of wires (three lengths of speaker wire and one of sprinkler wire) and then wrapping them in spiral wrap tubing. The manual suggest using zip-ties and electrical tape every 5 feet to hold the wires together but Geoff decided to go with spiral wrap because it holds the entire 50 feet of wire together more securely and adds an additional barrier between wire and water.  (Geoff can be seen assisting Fuwu with wrapping his wires together in the teaser image.)

The two teams who were not working on their umbilical worked outside on the catwalk to make cut outs on their frames to mount their motors in. Starting with the basics as always, they measured and marked the center and outsides of their motors on the corresponding cross struts, drilled one large hole on the center mark followed by two smaller hole on the outside marks and connected the holes with a Sharpie. Before cutting out the motor mounts, everyone made sure to drill the imperative holes in each T and corner connector on the top and bottom of their frame. These "vent" holes allow air to escape and for the frame to fill with water, which helps it sit lower in the water and maintain a neutral buoyancy when the floats are added to the top of the frame later on.  Following the completion of the outline and after they drilled vent holes, the teams cut out their outlines using a provided drimmel and let the PVC dust fly.

Here’s Stephanie showing her mastery of the drimmel.