Getting ready, in rough seas (new instruments, teaser cores, and more…)
At our first drill site and beyond 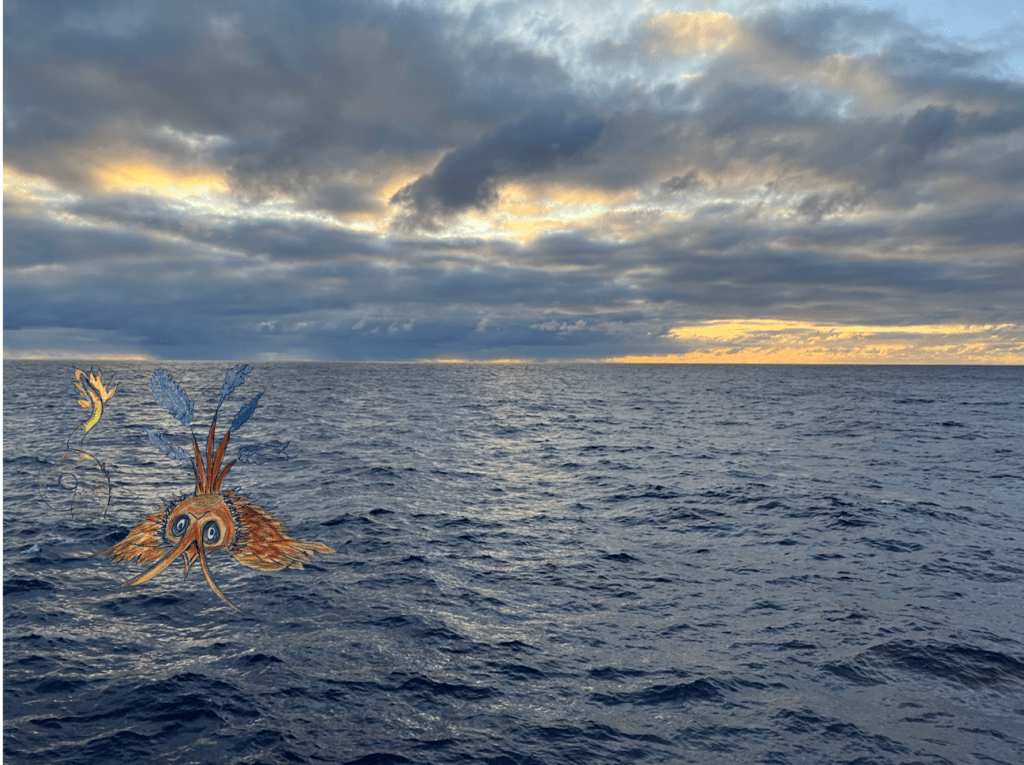 When you step outside on deck, all you see for miles is blue water. It made me think of the many sea explorers that voyaged across the oceans when maps were incomplete and inaccurate.

It also made me remember that even in the recent past many maps of the oceans had elaborate sea monsters drawn on them. I started to search for the reason those sea monsters adorned these charts. At first, I guessed that they were placed on maps to indicate sightings inspired by specific sea life and they just over exaggerated the proportions for drama. Then, I learned that it is a possibility that the sea monsters were placed on maps as decoration for the upper class to display in their homes (Waters, 2013). Sailors worked off less fancy maps. Also, I learned that the sea monsters drawn or printed on maps were actually costly to include, only emphasizing their purpose for decoration and less for practical use (Miller, 2013). Check out both articles to see some examples of sea monsters in various maps.

After looking at the variety of examples of maps from the 1500s and 1600s, the sea monsters were quite creative. In fact, both Miller (2013) and Waters (2013) described the belief that for each land animal a version of it existed that was adapted for the sea. I thought that was funny, especially when I saw the sea pig design. I wonder what the map designers would create for a sea baboon; that would be quite an interesting sight.

On the JOIDES Resolution, we have a team of well-seasoned sea farers that use digital maps, precision positioning and satellite navigation to ensure we go in the right direction to the correct places, and  can plant operations around the predicted storms. If you want to learn more, you can always read through a blog from Expedition 350 “Navigation” or from Expedition 372 “3407 Nautical Miles – How Do We Get To New Zealand?”. Once it was mentioned to me in passing that paper nautical maps are still sometimes used as a backup but there are still some very poorly mapped parts of the ocean. We are still discovering the ocean floor.

Each expedition has years of planning. Over that time teams of scientists from various programs, institutions, and countries meet to refine the science objectives, exact locations, and safety of drill sites for an expedition. Each two month long expedition often takes more than five years of planning once approved for scheduling. Once determined, a map is created to show the planned drill sites.  Below is the map that was created for IODP Expeditions 390 and 393.

The ship has 113 people onboard, and everyone is always curious about where we are while at sea. Because there are no reference points in the open ocean there are digital maps displayed on screens through the vessel.

Also scientists hang up the IODP map to indicate site locations to help remind them which site is where on the sea floor. Since those maps are decorating the lab walls, I thought  we could design sea monsters to put on the drill site map in addition to the dots. That way there would be a more dressed up version of the map! Therefore, I asked the science party what sea monsters they would put on our South Atlantic Transect map.

Below is the resulting sea monster map.

Each artist shared their reason for their sea monster creation.

“I first thought of how you were explaining that sea monsters were usually animals seen on land but in their sea version, so I thought about what animal I see back home (Wisconsin) and of course the first animal that came to mind was COWS! And then I thought it was kind of absurd because cows are big animals and could not imagine how it could live in the ocean. I thought a bit more on how cows eat and live and cows are grazers so they are constantly eating grass. Then I thought my seacow could be a bottom feeder, mostly living on the ocean floor, scavenging whatever is found on the ground. And because cows are known to emit a lot of methane (farts) I thought it would be very funny if the seacow used the methane (gas) to move itself within the ocean depth (let some gas out, sink to the floor, has more gas and rises).”

“It is a sort of mash up of a slug and octopus.  I was thinking it should be a creature that could crawl it’s way up a drill pipe! Plus it had to be pink as that is my favourite colour!”

“I started out with random shapes and proceeded to place body parts for each shape. The sharp triangles became the eyes, which were inspired by the deep sea fish, Barreleye. The tiny rectangle became the mouth, and I knew I wanted the scales to be obvious. Though it has a tail and big pectoral fins it probably would be a clumsy swimmer.”

Mallika Jonnalagadda. Her sea monster is called That which has many names: Stropha, Bill, Bifurcated Aquatic Raptor

“I was just intrigued about the idea of “Sea Monster” and looked it up on the internet. I never really thought about monsters in the sea to be quite frank. The design was probably since it resembled a fish but it was also trying to tell us something “maybe like to save our seas”. Not quite monster like eh? But frankly I looked up a few and thought this was a perfect fit for something not very scary and also that looked like a weird underwater creature.”

Thanks for reading and beware there be sea monsters out here.