The Sands of Sonora

The Sedimentologists’ Plight
Ginny Edgcomb: Searching For The Fungi of Guaymas 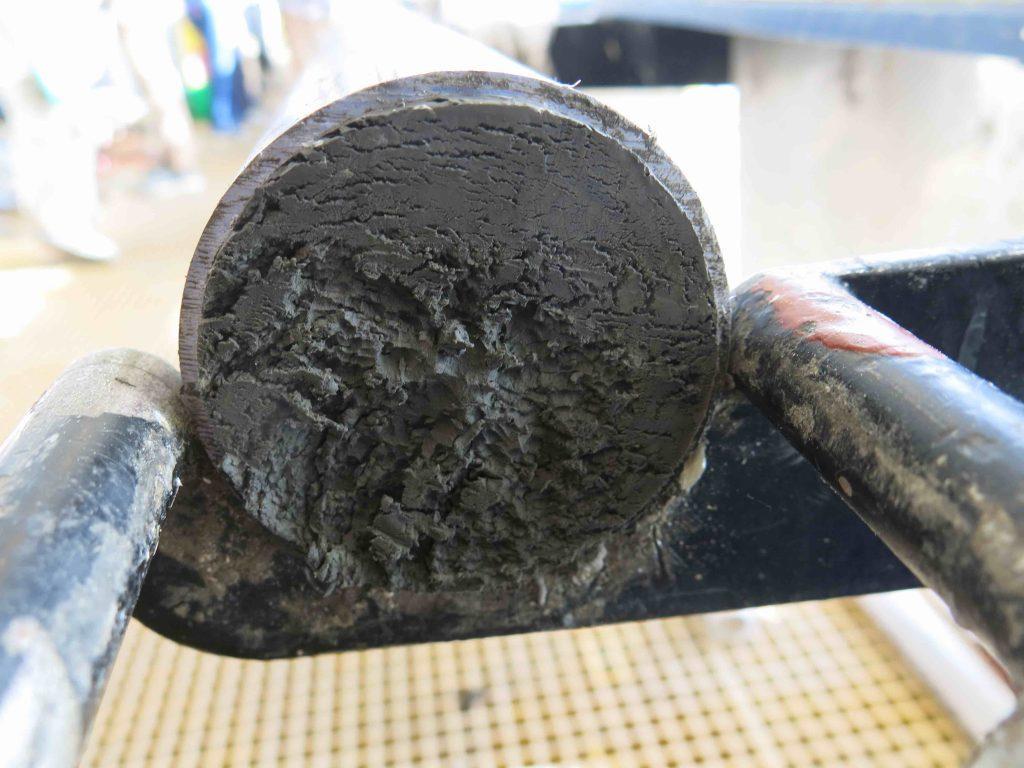 The sediments of the southeastern most site, No. 1551 in IODP count, introduce a new complication: sand. Previous cores have only occasionally included thin sand layers, for example volcanic beach sands from Isla Tortuga in the northwestern end of the basin. Now we are drilling at a site that is dominated by terrestrial sediments, translation: sand. River gravel and sand has been swept down by flash floods and rivers from the deserts and mountains of Sonora, and has accumulated in enormous piles on the Sonora continental margin — which at some point collapsed and buried much of eastern Guaymas Basin.

The first core, the mudline core, is coming up just before noon and is taken care of my the night shift, led by Ginny. This core has the familiar olive-green color of diatom ooze.

A few hours later in the afternoon, the day shift — led by Yuki —, is receiving one of the deeper cores from this hole, Number 5 at ca. 40 meters depth. This one is dark-grey and the sediment has a fine silty and clayey texture; see close-up picture on top. We have never seen anything like this in the marine sediments that have dominated all previous sites. Finely grained sediments like these often transition into coarser-grained sediments deeper down, which are heavier and settle sooner.

The last core, Number 6, removes all doubt; it contains coarse-grained sand and water that sloshes back and forth within the core liner. Finer sediments can absorb some water without disintegrating; but sand is immediately fluidized. This is a major issue within the borehole: flushing the hole with drilling fluid mobilizes the sand layers and causes them to collapse into the hole; the hole diameter increases, and the walls begin to collapse.

The cores that are recovered from these collapsing subsurface sand piles are dripping wet. Sand does not bind fluids very well; the seawater-based drilling fluid that has penetrated the sandy cores begins to drain out and causes a mess in the core lab.

Enough. After a 50 meter microbiology hole and a previous 100 meter sedimentology hole last night, we stop here and declare “end of site.” According to the seismic profiles of this area, the Sands of Sonora in the eastern Guaymas Basin are hundreds of meters thick. There is no chance to reach target depth within a reasonable time. And there are potential sites that are more rewarding to drill… stay tuned for updates tomorrow.

This blog post first appeared on Nov. 3 on my daily blog of EXP385. Make sure to go to expedition385.wordpress.com to read the latest updates of this expedition!