Today on the JR

End of an Era
Drilling on the JR 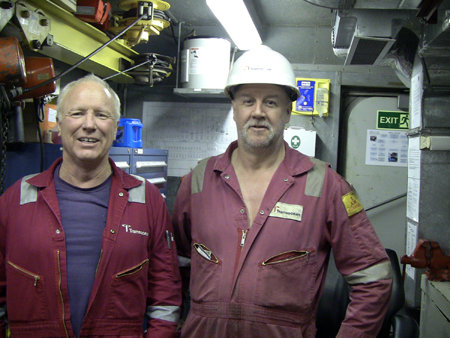 We are expecting to reach our last drilling site within the next hour. The water depth is 5300 meters so it will take many hours to assemble and lower the drill pipe to the seafloor. Later this afternoon, the traditional kite flying contest will be held on the helideck. That should be fun! Late tonight, the coring operations should begin. The purpose of the first hole is to determine the exact depth to the seafloor. Today, I’m going to tell you a little about several of the people who do the drilling.

Nick grew up in the small city of Artesia, New Mexico in an oil related business family. His father owned a cable tool company and Nick gained experience as a roughneck by the time he was in high school and college. On the JR, he operates the machinery involved in he coring operation. Prior to working on the JOIDES Resolution, he worked in the oil fields of New Mexico, Libya, Senegal, the North Sea, and Nigeria.

During his time off, he likes to golf and travel. He owns some property in the Philippines where he plans to retire in the future.

Phil grew up in Scotland in the city of Aberdeen. Since the discovery of oil in the North Sea, the city has been transformed into an oil town. Many of the people work in industries that provide support for the oil rigs. He got involved in the oil industry when some of his friends encouraged him to apply for work. By the age of 17, he was working offshore. He has spent time in the North Sea near the Shetland Islands and in the Norwegian sector. He has worked on the JR for about 13 years and supervises the workers on the drill floor.

In his spare time, Phil likes GP (Grand Prix) motor racing and fabricating things. That would explain why he has a house in the Philippines that he continues to build onto.

Both Nick and Phil say that it is much better working on the JOIDES Resolution than on oil rigs. The working atmosphere is much more relaxed and the turnover rate for workers is much lower than on an oil rig. This gives everyone a chance to know each other and a sense of camaraderie develops.