Everybody wants to be a cat
Weekend Specials 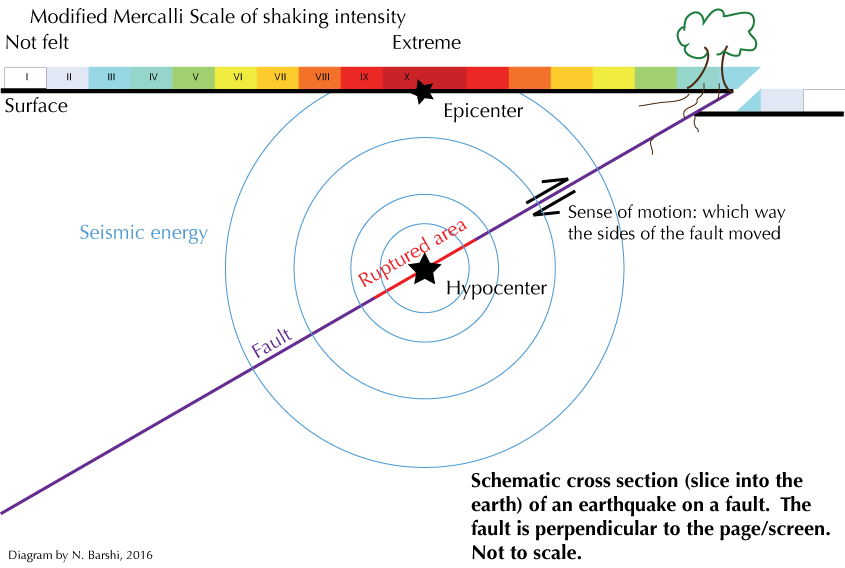 Earthquakes may bring to mind fear and danger or perhaps confusion and curiosity. Some earthquakes can be very destructive, as we have seen in several recent events. To help mitigate the damage and loss of life, earthquake scientists aim to better understand the physical context of great earthquakes, like the 2004 M 9 Sumatra-Adaman Earthquake. That’s part of the goal of Expedition 362. But first, we need to know what an earthquake is.

Seconds to minutes is the timescale for a typical earthquake*.  The larger the earthquake, the longer it lasts.  I’ve experienced a few M 4 to M 5.5 earthquakes.  They lasted about 10 seconds. The 2004 Sumatra earthquake, M > 9, lasted between 3 and 4 minutes.

Slip along a fault:

A fault is a surface that exists in three dimensions underground.  Faults can be as tiny as a few millimeters long/wide and as large as thousands of kilometers long and up to hundreds of kilometers wide into the subsurface (if it makes a shallow angle to the surface).  Faults have two sides that move past each other, usually in jumps and starts because friction keeps them from sliding smoothly past each other.  These jumps and starts are the earthquakes, and the jump distance along the fault surface is called “slip”.  This slip starts in one location, the hypocenter, and then breaks through the rocks on the fault surface.  This breaking is called “rupture”, and the resulting ruptured area is sometimes called the “slip patch”, the area on the fault that moved during the earthquake.  What controls the area of the slip patch is another story for another time, but for now remember that the bigger the area, the bigger the earthquake.

We measure the energy released in terms of earthquake magnitude. Earthquakes release a tremendous amount of energy.  For example the Sumatra M9 earthquake released about 3 x 10^17 Joules—that’s 475 megatons of TNT or 23,000 times as much energy as an atomic bomb (Kanamori, 2006).

In order to be released, the energy must first be stored.  This is a basic necessity for making earthquakes possible: building up elastic potential energy in the rocks on either side of a fault, with friction on the fault holding the sides together without sliding (yet!).  This is like stretching a rubber band.  If you let go, it bounces back to its original length because it’s elastic.  It can make that change because you’ve given it elastic potential energy that gets stored until you let go—or until the rubber band breaks.  The fact that tectonic plates are always moving is the key to the build up of strain energy and its release as an earthquake. Strain energy builds up over tens, hundreds, or even thousands of years as the plates move past one another. Eventually the stresses along the locked portions between plates overcome the friction and all the accumulated energy is released as kinetic energy (motion), heat energy, and seismic wave energy. The motion along a slip patch can stretch or compress areas away from the fault, which may cause other faults to rupture.  This is one of the reasons for aftershocks.

How much shaking we feel depends on a lot of factors including how close we are to the hypocenter (see diagram) and the type of rock transmitting the earthquake.  Just like sound travels differently through water and air, as you know from playing the game “telephone” in the pool, seismic waves travel differently through different kinds of rock.  You can get a feel for this by striking different tiles of rock or other material with a mallet from your friends’ xylophone (ask permission first).  The higher pitch you hear from hitting the surface of the rock tile versus the cement block means the sound waves can travel faster through the rock tile.  The closer you are to the hypocenter, the more shaking you’ll feel.  Also harder rock is more efficient at transmitting energy.  This is why the M 5.8 earthquake in Virginia in August 2011 was felt far away from Virginal, but an earthquake of the same size in my hometown in central-coast California may only be felt by people living very close by.

We tend to think of earthquakes as points and of faults as lines.  Faults are complex structures that exist in three dimensions (though we usually draw them in two, on a map or on a cross section).  They can be rough or smooth or deep or shallow.  Earthquakes are also a combination of different types of movement over an area.  This combined complexity makes faults and earthquakes both difficult and fascinating to study, and their effects on humans make them urgent topics of research.

*Earthquake scientists have recently described releases of seismic energy that last much longer than minutes—days to years—and share some characteristics with typical earthquakes.  They call these “slow-slip events”.  You can read more about them here<, though the explanation is fairly technical since it’s written for a physics audience.

**Update** I just came across this more accessible article in the Smithsonian Magazine<.  We wonder on Exp 362 if perhaps some of what we’ll find in terms of sediment strength could help clarify the mechanics of slow slip events.