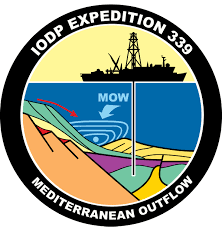 Why on Earth are we going to drill on the Gulf of Cadiz?

The Mediterranean Sea became separated from the world’s oceans and mostly desiccated by evaporation about 5.6 million years ago during what is known as the Messinian Salinity Crisis. This event led to the increase of the salinity of the Mediterranean waters causing the precipitation of large amounts of evaporite minerals like gypsum and halite on the seafloor.

Around 5.3 million years ago the Atlantic waters found a way through the present Gibraltar Strait and rapidly refilled the Mediterranean in an event known as the post-Messinian flood that opened the strait. Once the water levels stabilized water started to flow in both an eastward and a westward direction through the Gibraltar Strait.

Today the Mediterranean waters are so much saltier than the Atlantic waters that they sink below the constantly incoming Atlantic water, and when they cross the Gibraltar Strait form a highly saline and warm, intermediate layer of water known as Mediterranean Outflow Water (MOW). The MOW flows westward above another important water mass known as North Atlantic Deep Water (NADW).

In the Gulf of Cadiz the MOW, deflected northward by the Coriolis force against the continental slope, functions as a westward contour current along the margin. The interaction of this water mass with the seafloor is responsible for the development of several erosional and depositional features.

By drilling and studying the sediments deposited by the MOW in the Gulf of Cadiz and the SW Portuguese continental margin, the Expedition 339 team wanted to understand the opening of the Gibraltar Gateway, the onset of the MOW, and its influence on the North Atlantic thermohaline circulation, sea level changes and past climate oscillations.

You can watch a presentation by co-chief scientist Dorrik Stow with a summary of the questions that were adressed during the expedition. You can also find more detailed info in the Scientific Prospectus & Addendum.

…that in the Gulf of Cádiz the MOW flows between 500 and 1400 meters below sea level with a velocity close to 300 cm/s at the Strait of Gibraltar.

…that the present-day flux of the MOW through the Gibraltar Gateway is carrying warm waters and more than 50,000 tons of excess salt every second into the North Atlantic.