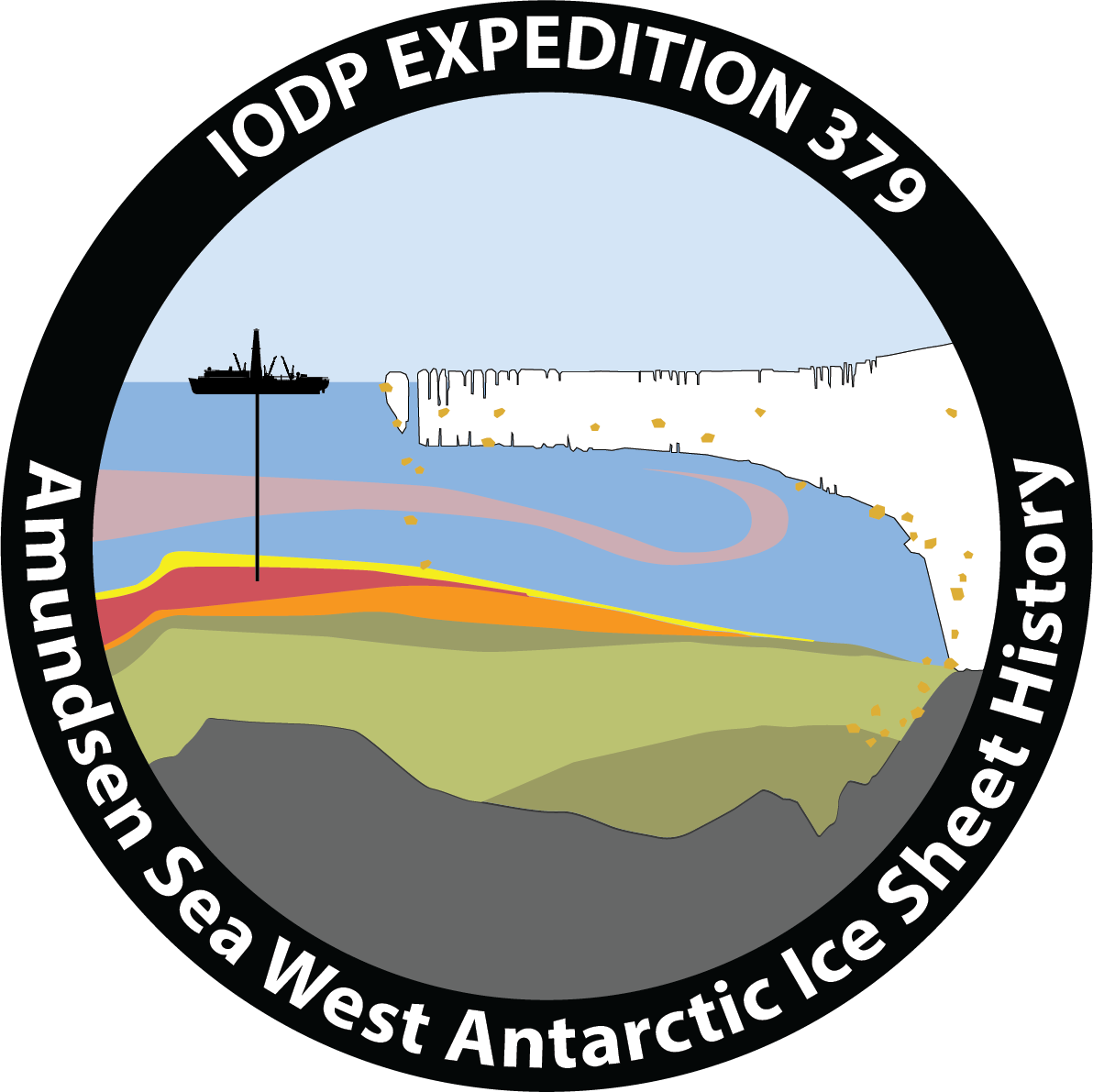 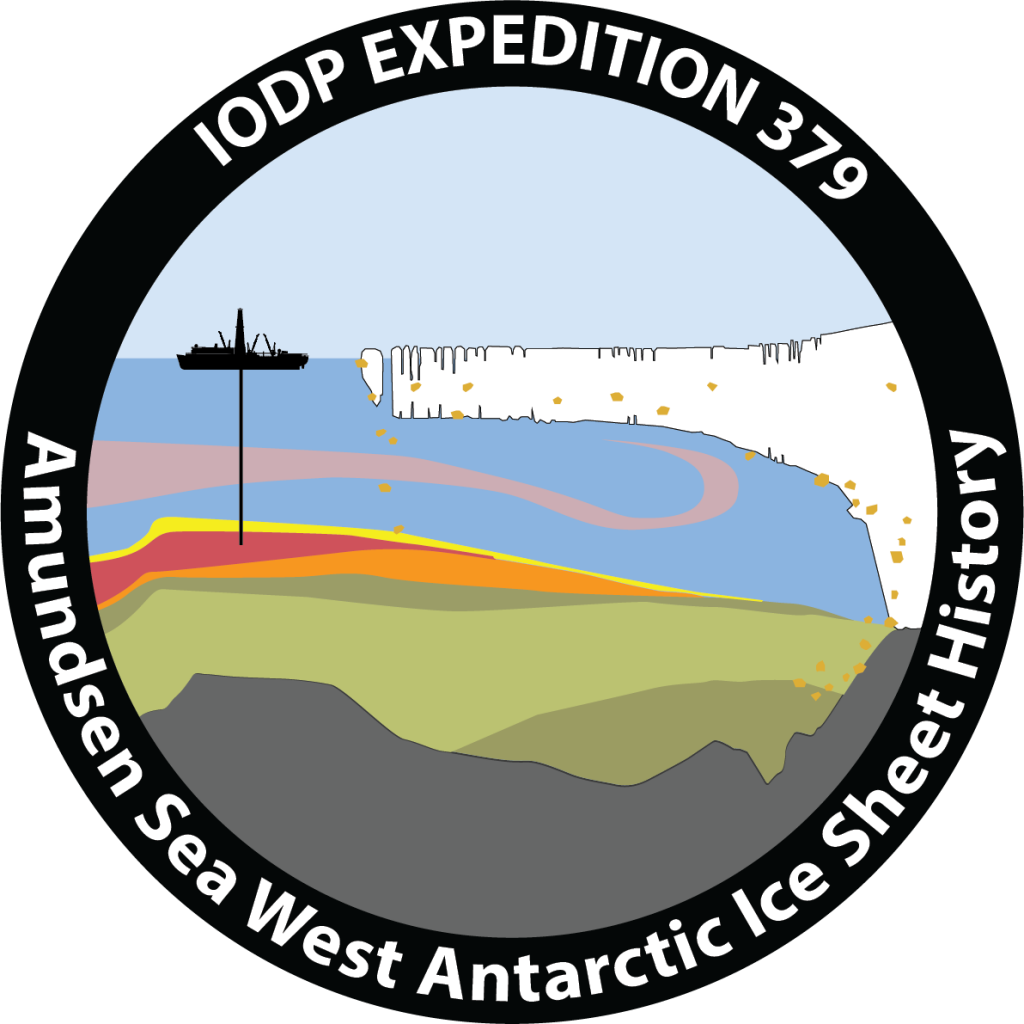 Antarctic Summer, January – March 2019:  a team of 116 ship crew, scientists, technicians, and communicators takes to the Amundsen Sea, Antarctica’s fastest-warming sea, aboard the JOIDES Resolution. Over the course of their two-month mission, they plan to drill at least five sites beneath the seabed and bring home sediment samples that are millions of years old, in order to recreate the history of the West Antarctic Ice Sheet (WAIS).

• The rock cores we collect will provide the first such data from the Amundsen Sea Embayment (ASE), an area that has experienced extensive ice loss and has never been drilled before. Combined with data from 2018’s Ross Sea exploration (Expedition 374), the projects will present a comprehensive picture of the impact of a warming climate on the WAIS, the most rapidly shrinking of Antarctica’s two major ice sheets, contributing 175 Gigatons/year more to sea level rise than the East Antarctic Ice Sheet.

• Our area of study in the Amundsen Sea was named for Norwegian explorer Roald Amundsen, who led the first successful expedition to the South Pole in 1911. The WAIS drains into this sea, which therefore records the history of the advance and retreat of the ice sheet. The work here will set the stage for answering major questions about the timeline of changes to the spectacular, extensive, and dynamic ice feeding this sea. Piecing together the history of the WAIS – our research goal for Expedition 379 – will inform a model showing how the WAIS may react to climate change and resulting environmental changes in the future. How have warmer waters affected the WAIS in the past, and what do these patterns mean for the warming to come? 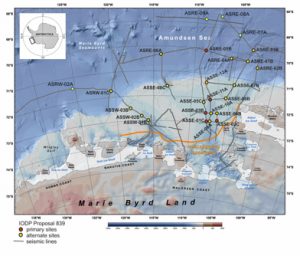 • The planned drill sites progress from the continental rise across the slope and the inner shelf in order to gather the full the greenhouse to ice-house transition, early glaciation, and the dynamics of larger ice sheets from the Miocene (23 million years ago) to the Pleistocene era (1.8 million years ago).  There is no ice breaker accompanying this cruise, so we have selected sites that have high odds for ice-free waters.

• Who’s aboard? Co-chief scientists Karsten Gohl and Julia Wellner lead a team of 57 scientists in pairs who will cover a 24-hour schedule to maximize ship time and efficiency. These include drilling and laboratory technicians, as well as specialists in chemistry, magnetism, paleoclimatology, and microbiology who will analyze the drill core as it is brought up from below the seabed. Their findings will impact the work of climate modelers among our group. The science team is supported by the ship crew, and communications specialists involved in outreach to school students and the public. 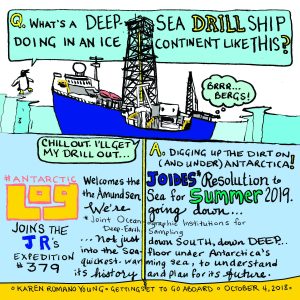 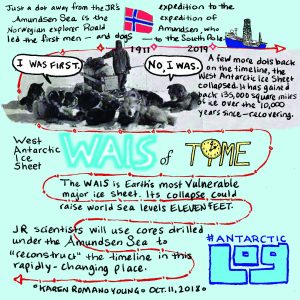 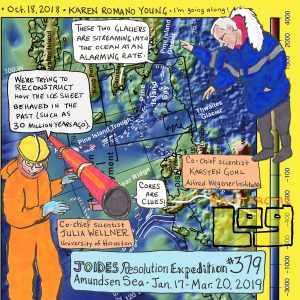 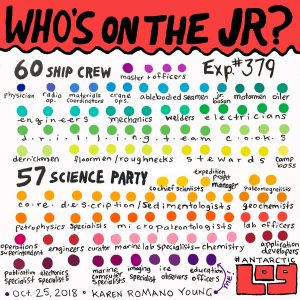 Click here for all the #AntarcticLog comics about Expedition #379

Author:
KRomanoYoung
About:
I'm thrilled to be an outreach officer aboard the JR! I've been to sea and into the field a few times with scientists and it is my favorite thing in the world -- and has taken me all over, including the Arctic and Antarctic. I'm the creator of the science comic #antarcticlog, and I write and illustrate books for young people, including HUNDRED PERCENT and SHARK QUEST.
More articles by: KRomanoYoung
JOIDES Resolution