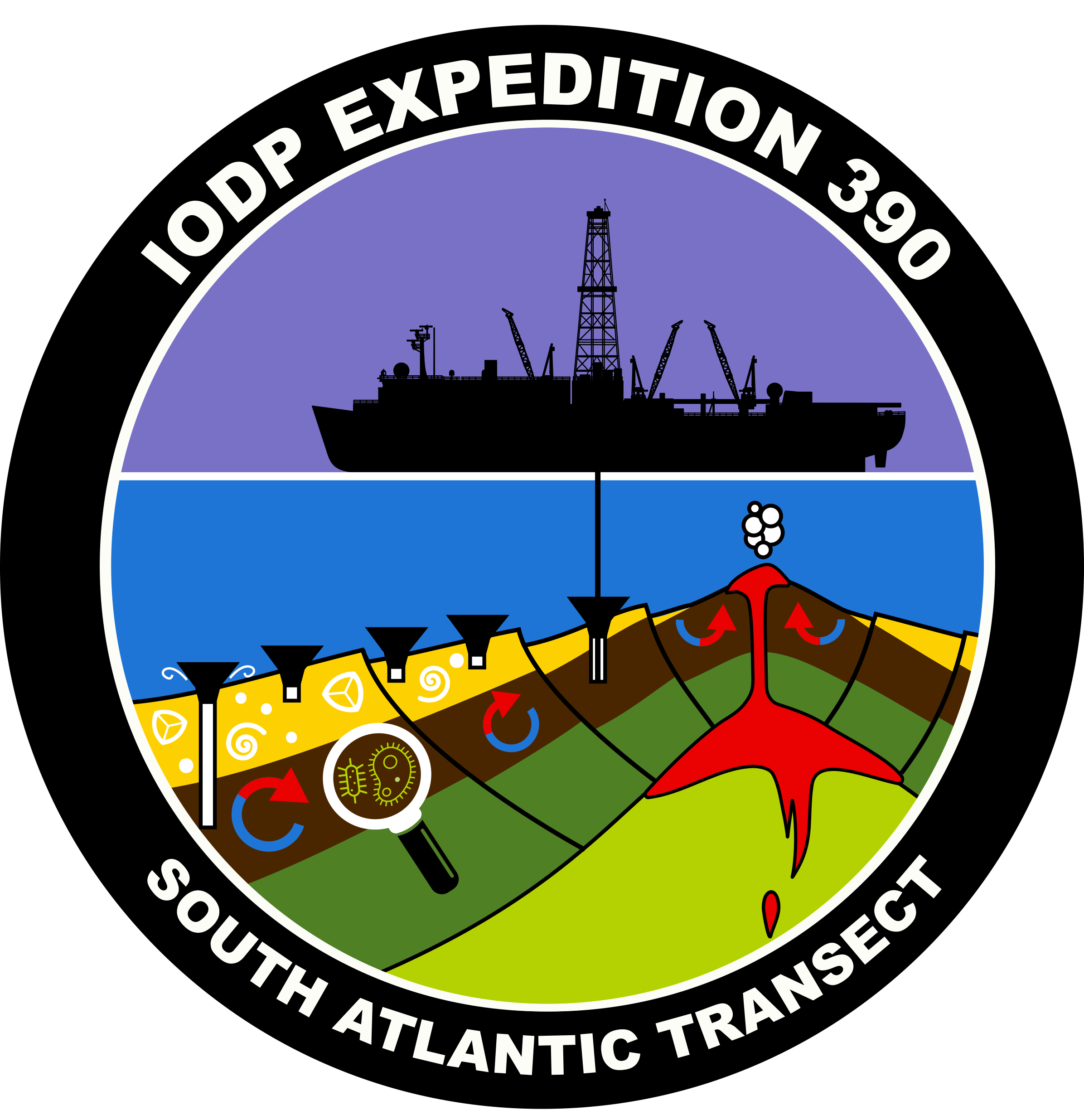 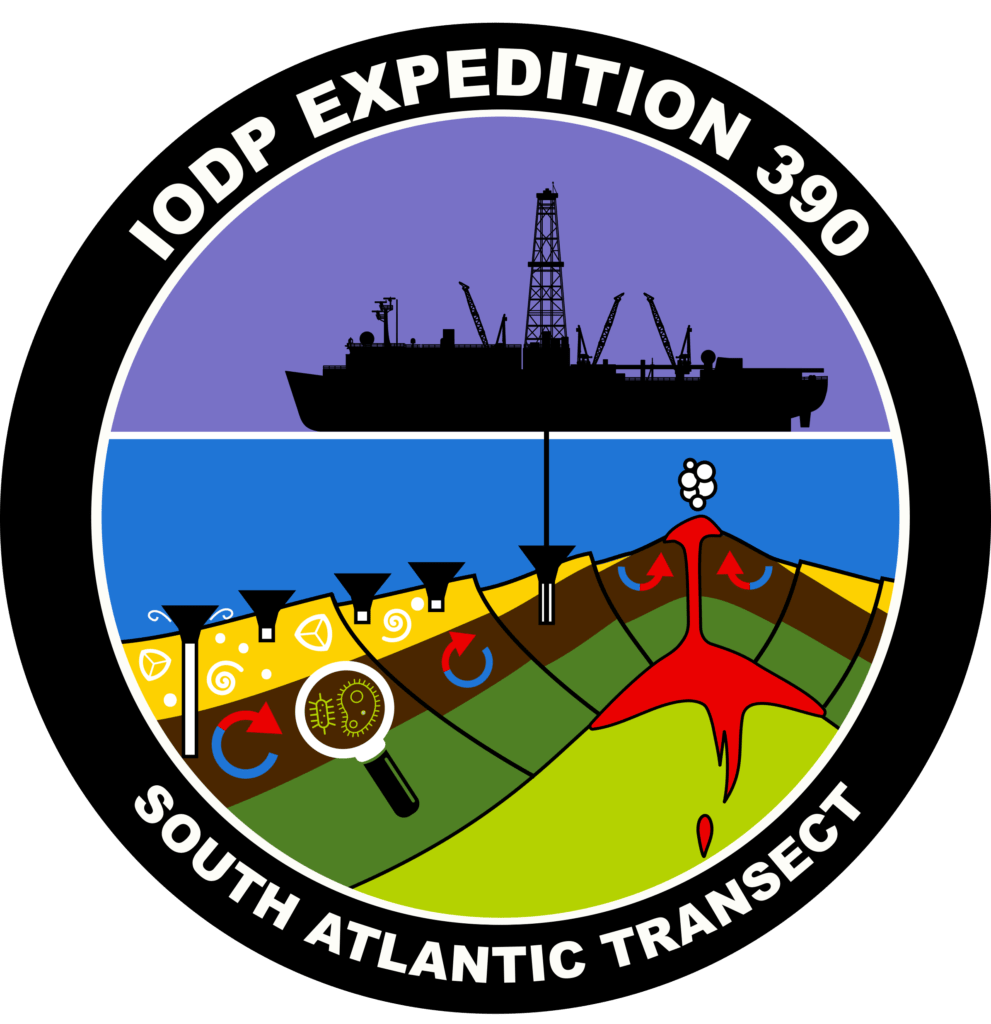 BELOW THE SOUTH ATLANTIC OCEAN

Deep below the Atlantic Ocean, running from north to south along its center, lies the Mid-Atlantic Ridge (MAR), part of the underwater volcanic mountain system known as the mid-ocean ridge (MOR). This is a divergent tectonic plate boundary, a spreading center where two tectonic plates move apart and magma rises to form new ocean crust. We will sail across the South Atlantic Ocean, where the South American Plate and African Plate move away from each other as new ocean crust is forged from submarine volcanic eruptions.

Since it began to form  ~100 million years ago, the South Atlantic Ocean basin has grown while the ocean crust, which is continually moving away from the MOR, continues to age, cool, and compress. We will core through the sediment on the seafloor and drill into the ocean crust below it, to learn more about hydrothermal circulation (ocean water heating as it moves through cracks in the cooling crust) and about the communities of microscopic organisms that live not only in the seafloor sediment—but in the rocks of the crust itself!

We’re fortunate that two pre-expeditions, Expedition 390C (October–December 2020,) and Expedition 395E (April–June 2021), visited this transect and prepared the sites to facilitate our sample collection. So, the South Atlantic Transect will eventually be a combination of four expeditions! 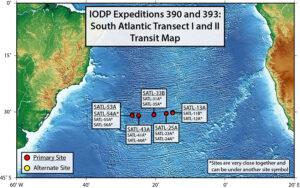 WHAT’S SO SPECIAL ABOUT THIS LOCATION?

The sediment along this transect was originally partially cored during Deep Sea Drilling Project Leg 3 (December 1968 – January 1969). This historic expedition discovered that the deepest sediments got older at the same rate on either side of the Mid-Atlantic Ridge, verifying the theories of:

Over the last 50 years, our drilling technology and ability to analyze cores have developed significantly. We now have the opportunity to revisit these sites and address many high-priority scientific objectives. The data we gather will fill important gaps in our sampling of sediment and ocean crust undisturbed since its deposition/formation.

THE PAST IS A WINDOW INTO THE FUTURE

We have learned so much about how Earth works since the early days of ocean drilling that we now have different questions we want to answer. For example, no one knew about either hydrothermal circulation or the sub-seafloor biosphere in those days. It is important to revisit and sample the South Atlantic along the same line sampled during DSDP Leg 3 because the new data we obtain will help us not only better understand how the seafloor works, but we can apply that knowledge to fundamental fields of science, technology, engineering and math such as climate change and evolution.

Earth Connections — The dynamic processes that create and destroy ocean basins, shift the position of continents, and generate volcanoes and earthquakes extend from Earth’s core to its atmosphere, and are fundamental for understanding global change within the context of planetary evolution.

As one of our primary objectives, we seek to quantify the timing, duration, and extent of hot fluid moving through the aging ocean crust.

Biosphere Frontiers — Samples recovered by ocean drilling allow the study of Earth’s largest ecosystems, offering insight into the origins and limits of the deep biosphere and evolution of microscopic marine organisms during times of environmental change.

Another of our primary objectives is to investigate the microbes living in the sediment and basement and how they have varied in abundance and diversity over time and location.

As a secondary objective, we seek to investigate the responses of Atlantic Ocean circulation patterns and Earth’s climate system to rapid climate change during the Late Cretaceous Period and Cenozoic Era (61 – 7 million years ago).

We’ll explore these questions and more during our two months at sea and for years beyond our time on the JR. Make sure to follow expeditions 390 and 393 on Twitter, Facebook, and Instagram, and stay tuned for blog posts that break down each of the expedition objectives and share the exciting activities onboard. Sign up for a free ship-to-shore visit!