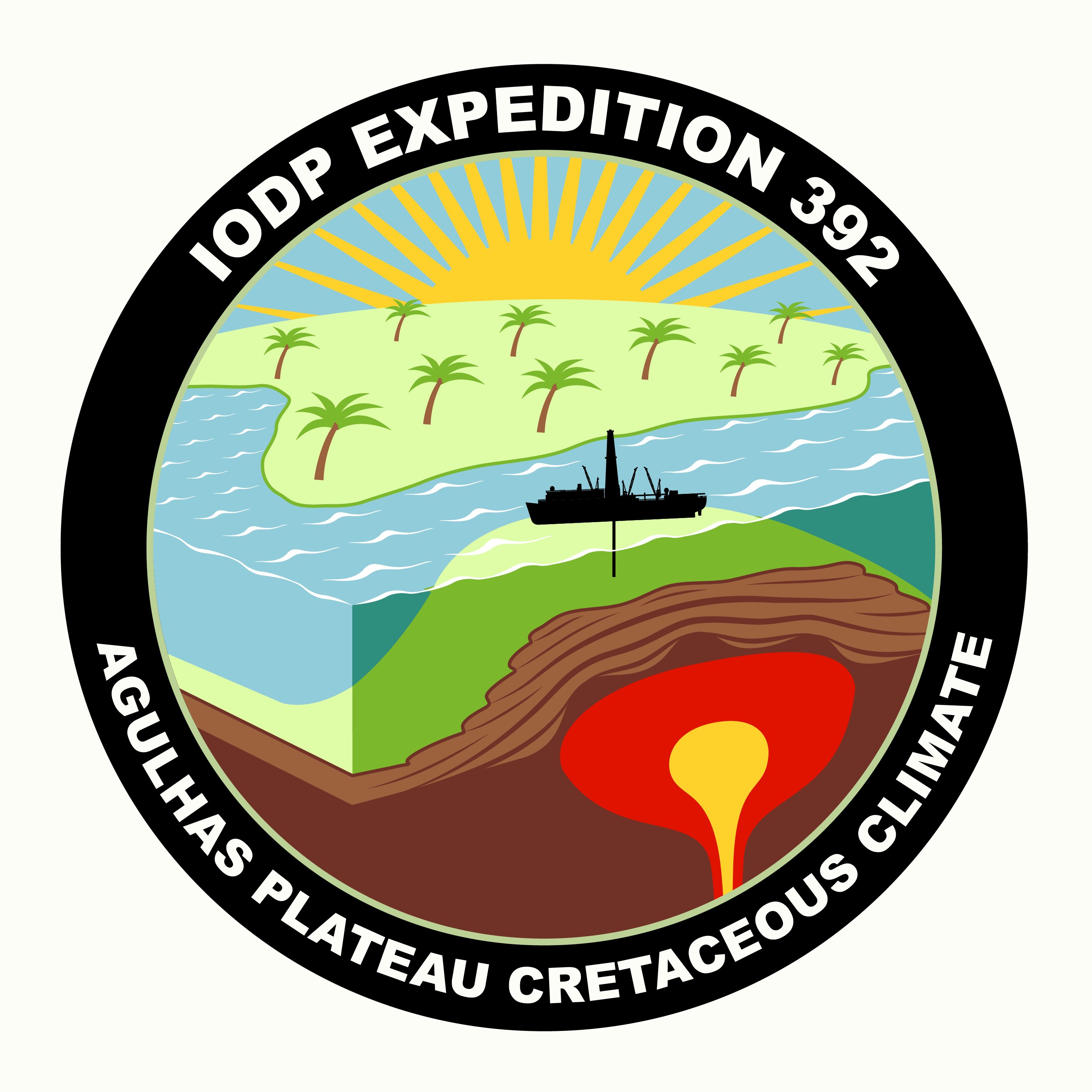 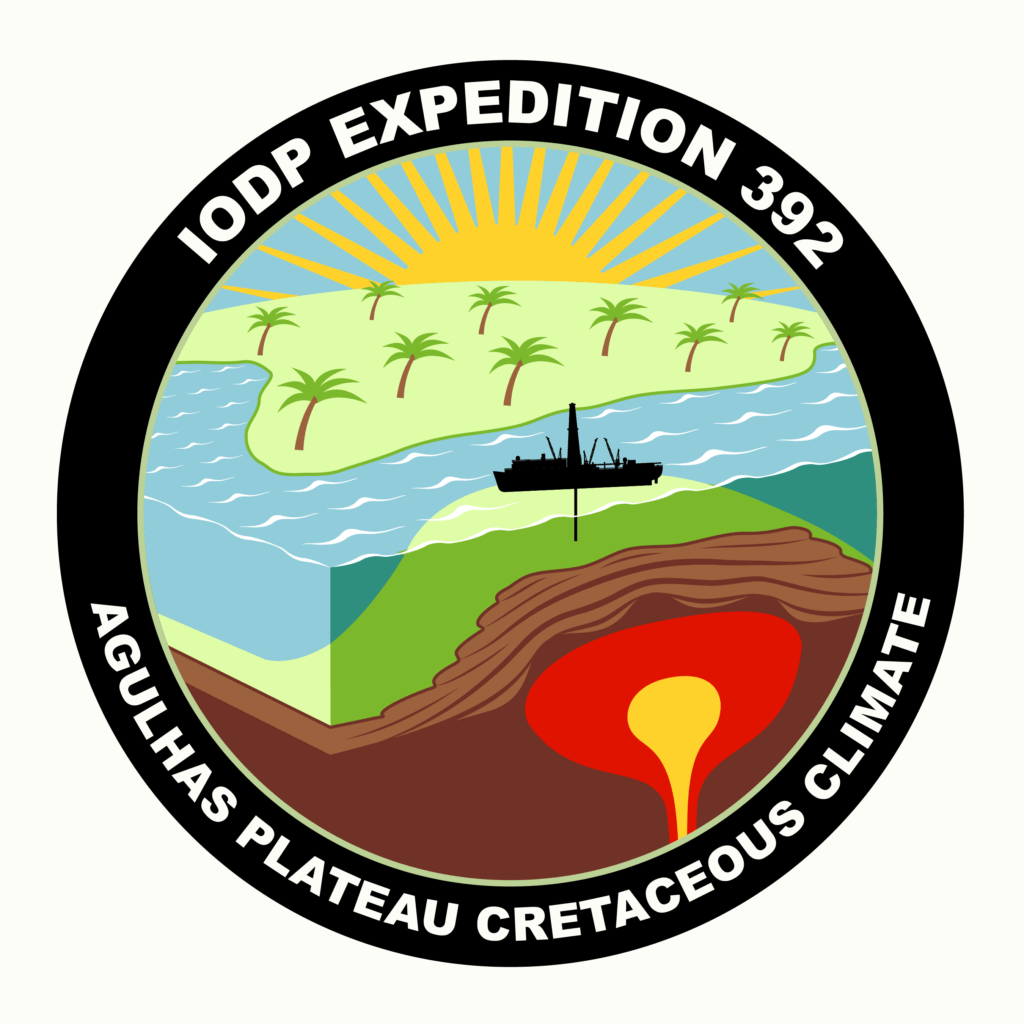 The team has targeted five sites for sampling, some more than 4,000 meters below the sea surface. This feat of engineering involves drilling down through thick sedimentary layers to reach the lava flows below.

The goals of the science team include determining the origin of the plateau while reconstructing the processes that followed the opening of ocean gateways in the Southwest Indian Ocean over the past ~120 million years and associated climatic responses. 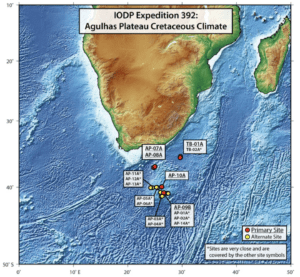 “This is the first scientific drilling effort to directly sample the basement rocks of the Agulhas Plateau and the overlying sedimentary strata, thereby providing a unique and unprecedented view into the plateau’s origin and subsequent climate history.”—Co-Chief scientist Steven Bohaty, Heidelberg University, Germany

This plateau is thought to be the remains of a volcanic eruption that occurred when Gondwana broke up into Antarctica, Africa and South America; originally forming at, or near, sea-level. The sediments laid down on top of the plateau since its formation, now more than 1km thick in places, record the long-term changes in paleo-climate and ocean circulation as the Earth evolved from warm, greenhouse conditions in the Cretaceous, to a cooler world with polar ice sheets in the Cenozoic.

It has been suggested that significant changes in past ocean and atmospheric circulation related to evolving depth of oceanic gateways drove regional- and global-scale climate change. The Africa – Southern Ocean Gateway that connects the Indian and Atlantic oceans opened but then was obstructed by the formation of the plateau, which hindered water mass exchange.

Incomplete sedimentary records from the southern high-latitudes make it challenging to understand Earth’s oscillatory cooling transition from the Cretaceous Hothouse (peaking at about 90 million years ago) to the mid-Cenozoic Icehouse (starting 34 million years ago), and therefore difficult to assess the relationship between climate change and gateway evolution.

By gathering rocks from far below the seabed, Expedition 392 seeks to develop a greater understanding of:

Scientific drilling of Cretaceous records on the Agulhas Plateau will recover rocks and sediment samples that provide fundamental insight into the complex interplay between southern African climate evolution; ocean redox (a process in which one substance or molecule is reduced and another oxidized, with oxidation and reduction considered together as complimentary processes); nutrient development and associated organic carbon burial; and multi-scale volcanic activity in the young and still-small Southern Ocean basin. Its location at a high southern paleo-latitude makes the Cretaceous archive of the Africa-Southern Ocean gateway a particularly valuable target.

“This is the first time this early phase of development of this particular gateway, and especially water mass exchange between the Indian, Southern and South Atlantic oceans, will be the target of scientific drilling. And this, in comparison to existing ODP and IODP drill sites from the Kerguelen and Naturaliste plateaus, will significantly advance the understanding of Large Igneous Province formation and the evolution of ocean tem­perature, circulation, and sedimentation patterns during the Creta­ceous.” —Co-Chief scientist Gabriele Uenzelmann-Neben, Alfred Wegener Institute, Germany

Author:
Maryalice Yakutchik
About:
I am a longtime science writer/multimedia journalist working independently again after 14 years with Johns Hopkins where I specialized in global health, public health and the basic sciences. Prior to that, I freelanced for newspapers, magazines and websites; notably, the Discovery Channel (discovery.com) where, as a globe-trotting expeditions correspondent, I covered everything from humpback whale genetics in Madagascar and body art in Morocco to wolf conservation in Italy, as well as research on rattlesnakes in Aruba and spectacled bears in Peru. Eons ago, after journalism school at Temple University (go Owls!), I spent 11 years as a reporter at the Reading Eagle, honing my craft as I wrote the daily mushroom report and descriptions of the Pet of the Week (all of whom got adopted, by the way).
More articles by: Maryalice Yakutchik
JOIDES Resolution