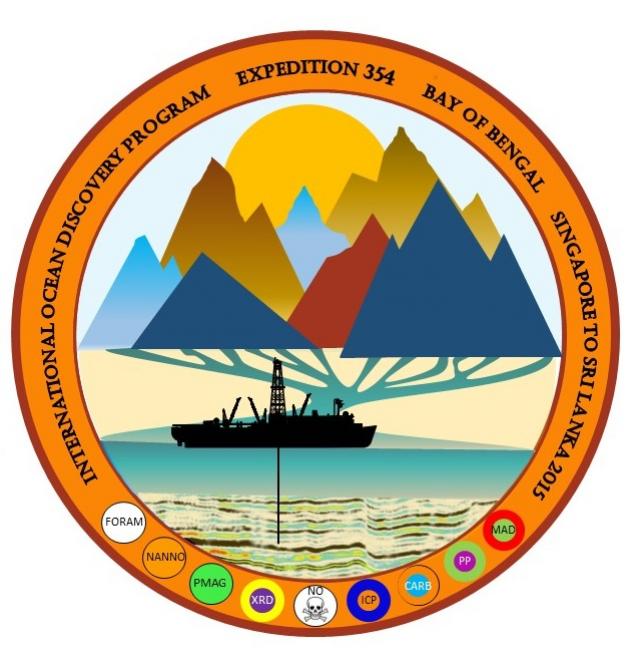 This expedition explored the connection between mountain formation and climate. The mountains studied are the highest on earth – the Himalaya. But the team studied them at the bottom of the ocean, in the Bay of Bengal, by looking at eroded sediment. These large and small bits of the mountains get washed into rivers and carried to the sea. The outflow of sediment into the Bay of Bengal is called the Bengal Fan. It’s called a fan because the sediment fans out, and it looks a little like a ladies’ fan. The team drilled sediment cores on a transect – six different sites in a line, across the middle of the Bengal Fan.

Check out our 2-minute Expedition Trailer – a video that will introduce you to our lead scientists and tell you more about the mission.

The video (with music!), Aboard the JOIDES Resolution, ponders the question: why come this far to sea?

Our most recent 6-minute video Source to Sink features interviews with three of our scientists and explains why studying the Himalayas at the bottom of the Bay of Bengal is so important.

What is the Bengal Fan?

The Bengal Fan is the largest submarine fan in the world. It is ~3000 km long, ~1000 km wide and up to 16.5 km thick. It covers the floor of the entire Bay of Bengal, bordered to the west by India, to the north by Bangladesh and to east by the Andaman Islands.

The fan began forming tens of millions of years ago when the Indian Plate collided with the Eurasian Plate, causing the uplift of the Himalaya and Tibetan Plateau, and with that, the subsequent erosion.

How are mountains and climate related?

The extreme height of the Himalaya make them very effective storm catchers. When moist tropical winds run into the mountains, the air is pushed up the wall of mountains. The air expands and cools, forming clouds and rain. This process is the primary cause of the Asian monsoon rains, which can drop 1-5 meters of water per year. All that water scours the mountains and erodes them. That sediment washes into mighty rivers, two of which, the Ganges and the Brahmaputra, drain into the Bay of Bengal. They transport a billion tons of formerly Himalaya material a year. When the Himalaya loses a billion tons of weight, the remaining mountain rises up slightly in a process called isostatic rebound. The mountains get reduced by erosion, but rebound and get slowly taller, creating that effective storm barrier, causing more erosion, and the cycle continues.

Because sedimentation in the Bengal Fan responds to both climate, in the changing intensity of the Asian monsoon, and tectonic processes, like isostatic rebound, its sediment records the past evolution of both the Himalaya and regional climate.

Here is an explanation of our expedition using only the most common 1000 words (note: mountain, ocean, and drill are not included!):

We spent two months out on the water with people from all over the world. Using a long stick, we broke the ground and pulled up small pieces of rock from the bottom of the water. By studying what these small pieces are made of, we learned about what the air and water were like many many years ago (like ten hundred hundred hundred years). The pieces also have tiny animals (and other things that used to be living) inside that told us how old the pieces were when they were put there.

It’s not easy – try it yourself here!