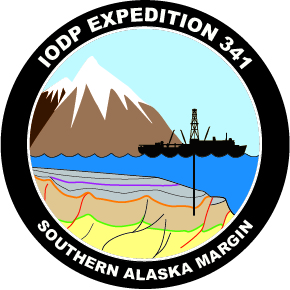 Are you interested in learning about how a changing global climate could affect how mountain belts form? Are you curious about how glaciers were growing and shrinking millions of years ago? Did you know that the Earth’s magnetic field changes over time? A diverse team of scientists onboard the JOIDES Resolution traveled to the Gulf of Alaska to collect sediments that revealed these secrets about the Earth’s past! How do scientists know what conditions on Earth were like millions of years ago? Expedition 341 explored the methods that scientists use to answer these fascinating questions about the Earth’s past.

The map below shows the five sampling locations that the JOIDES Resolution targeted for Expedition 341 in the Gulf of Alaska. We began our expedition in the deep sea at location GOA18-2A (U1417), and from there traveled to the continental shelf and slope to our final stop, GOAL 17B (U1421; click on the image to find out more information about the details and scientific objectives at each site). The sediments recovered at each site represent different geologic environments of formation along the continental margin that provided scientists with valuable information about the Earth’s geologic and climatic history in Southern Alaska. Sediments were recovered from depths between ~150 to 1158 meters below the sea floor, and the water depth among sampling sites ranges from 178 meters to 4218 meters.

The goals of the expedition were to:

1. Collect evidence to document the influence of increased glacial erosion on the growth and deformation of the St. Elias Mountains during a period of global cooling in the late Miocene period (~ 5 million years ago) to recent.

2. Establish the timing of advance and retreat cycles of the Northern Cordilleran Ice Sheet, and compare it with the growth and retreat of other global ice sheets.

3. Investigate the source of sediments and depositional history of the continental margin sedimentary rock sequences in the Gulf of Alaska to better understand the interactions between glacial, plate tectonic and oceanic processes on sedimentary rock deposition.

4. Understand the dynamics of productivity, nutrients, freshwater input to the ocean, and ocean circulation in the Northeast Pacific Ocean during periods of climate change to better understand their role in the global carbon cycle. This is particularly significant because studying past productivity will help scientists model the impact of future climate change in the Gulf of Alaska, where high productivity provides a home to important fisheries and ecosystems.

A Study of Earth Systems in Southern Alaska

The Earth is a rapidly changing planet, and scientists have recognized that it behaves like a system, made up of interacting parts or “spheres.”  The Earth’s spheres contain water (hydrosphere), land (geosphere), gases (atmosphere), and life (biosphere) that interact with each other by exchanging matter and energy. When one part of the Earth’s systems is modified other parts are affected. Expedition 341 sought to find evidence of these interactions and change in sediments collected from the Gulf of Alaska.  Scientists on board the JOIDES Resolution collected data to determine how changes in global climate affected each of Earth’s spheres in Southern Alaska millions of years ago. Investigating the interactions between the atmosphere, hydrosphere, geosphere, and biosphere in Southern Alaska is a study of the delicate balance between the Earth’s systems and is important for predicting future changes on our planet.
Climate and Tectonics

Scientists onboard the JOIDES Resolution investigated interactions among the Earth’s systems in Southern Alaska by evaluating how global climate change, erosion rates, and mountain building events are related. Home to the highest coastal mountain range on Earth, the St. Elias Mountains, the Gulf of Alaska is an ideal location to study these interconnections. The St. Elias Mountains formed during a period of significant global cooling and glacial erosion. Expedition 341 examined how the development of the St. Elias Mountains may have been impacted by a cooling global climate approximately 5 million to 2.5 million years ago.

Drilling Into the Past

What were conditions on Earth like 2.5 million years ago? Geologists refer to this point in geologic time as the end of the Neogene period and beginning of the Quaternary period. Earth scientists denote divisions in the geologic time scale based on changes in major geological or paleontological events, such as mass extinction events or changes in global climate. The end of the Neogene is marked by significant global change, including a drop in global temperature that resulted in the advance of glaciers in the Northern Hemisphere.  Scientists on board Expedition 341 hypothesized that the effects of increased glaciation may be profound, leading to more erosion on land, which may have contributed to the exhumation and deformation of the St. Elias Mountains.

Click here to check out the scientific prospectus: http://publications.iodp.org/scientific_prospectus/341/